The Fretless: Where a string quartet meets a pub session 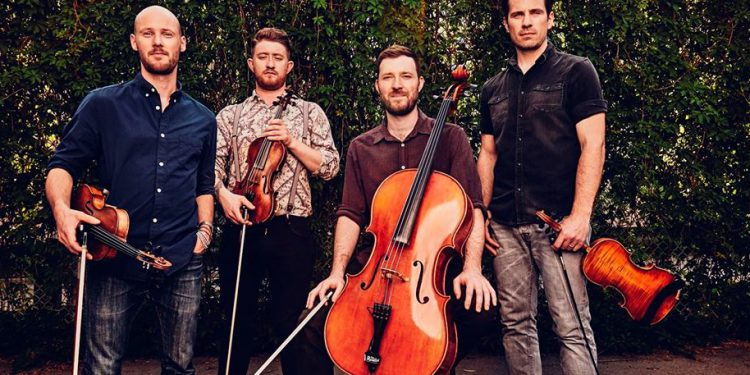 They may not have any frets on those instruments, but the sounds the four musicians make on the fiddles in this foursome are like nothing you’ve ever heard at a folk festival. It’s a string quartet that plays fiddle tunes – or maybe it’s fiddle tunes on baroque steroids! Whatever you call it, these fiddles of all sizes are giving a wholly different voice to age old tunes.

It’s a geographically diverse group of young men in The Fretless. Trent Freeman (fiddle) is from Comox, B.C., and now lives in Vancouver. New dad Karrnnel Sawitsky, also a fiddle player, is from Saskatoon but now lives in Toronto. Fiddler Ben Plotnick from Calgary now lives in Nashville, and Eric Wright, cello, is from Vermont. Trent and Eric both attended the Berklee College of Music in Boston, MA, while Ben studied at Humber College in Toronto. All three fiddle players, who had previously met numerous times in the tight-knit world of Canadian folk music, also swap around on the viola in Fretless.

The Fretless is a string quartet that sounds like it belongs in Carnegie Hall. Trent Freeman explained: “The quartet was the format of this group from the very beginning.” (Their first CD, Waterbound, was released in 2012.) “The instrumentation is so powerful and lush, and every time we arrange a new piece, fresh ideas arise because of the format. … we often come up with a new technique only to realize that it’s actually something that was used by a quartet 200 years ago.”

The band’s latest CD, Live From The Art Farm, is an exploration of Irish fiddle tunes, and the recording features a classic arranging style.  “We wanted this record to sound as natural and intimate as possible, so it was recorded to tape using only three microphones, in front of a live audience,” Trent said. “The energy of the room is captured, and the sound of the quartet playing together, musicians feeding off each other, is tangible and exciting.”

“It’s a live, unaltered recording technique,” he added. “With no overdubs or edits, our performance and arrangements are what really shine. The unity of the band and the cohesiveness of the collective sound are what is at the heart of this record.”

The Fretless members have a dream: “To bring these pub session tunes and energy to a theatre audience, while bringing the theatre or classical audience to the pub! We want to move the listener through many emotional spaces, opening one’s imagination using only string instruments.”

While the folk-influenced string quartet is not a new idea, the Fretless members feel that they’ve found a unique and successful approach to blending the styles.  It was a stunning performance they gave, showcasing at the Folk Music Ontario conference when their first CD, Waterbound, was hot off the press. You could safely say that the assembled captains of the folk music industry that year were pretty much gob-smacked at what the band was doing. There was a lineup of artistic directors waiting to speak with them after their showcase.

Already this year The Fretless has enjoyed two trips to the United Kingdom and a tour of eastern Canada and the northwest USA. This weekend, (May 18-19, 2018) they have gigs in Calgary and Edmonton, and this summer, we will see them across Canada and the USA.  Their unique sound is keeping them very busy this year, from folk festivals in British Columbia to a Chamber Music Festival in Ottawa.

So don’t fret, The Fretless will be coming to a festival near you very soon, and while you’re waiting to see them live, you can download their music from the website: www.thefretless.com

The Fretless in concert: