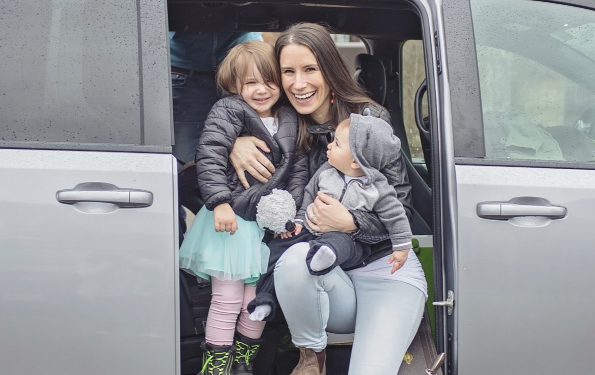 Photo:  Kristine St-Pierre on the road with her kids.

It’s the perennial question women have faced for years: “Is motherhood incompatible with a fulfilling career?”   Many women walk a fine line, wanting children, but also wanting a creative life, whether that’s in industry, commerce, professions, or in the arts.

Perhaps nowhere is it more difficult than with musician mothers. Long days and nights of touring, the need for uninterrupted time to create and practice their art, and simply the need for reflection to make the creativity come together – all these are very difficult, if not impossible, when you have demanding babies and youngsters on your hands. It’s fine if you’re a lawyer or a doctor with a substantive income where you can hire caregivers, but if you’re a musician, you’ve already largely taken a vow of poverty to have this kind of creative life, so hiring nannies is not often on your horizon.

The legendary Joni Mitchell is a classic case in point.  In 1965, she gave up her only daughter because, as an impoverished emerging folk musician, she could not provide for her. What anguish that situation must have created – anguish which you can clearly hear in much of Joni’s stunningly creative and highly personal songwriting.

For renowned Cape Breton fiddler, Natalie MacMaster, the situation was much different. Her career was already very well established – she was already a star – when she married Donnell Leahy from Lakefield, Ontario, a magnificent fiddler in his own right. The couple now has six home-schooled children (Natalie has a teaching degree), and tours with them regularly.  It was so much harder for Natalie and Donnell to travel without the children that it seemed very natural to bring them along, and now, the children perform in the show with their parents, something that gradually evolved from the kids’ own musical interests. But for women musicians who are still emerging from the shadows of anonymity, it’s often challenging. There are joys, but also compromises. Most people they meet are understanding, but sometimes, they aren’t.

In 2015, Sarah Blackwood, lead singer for Walk Off The Earth was seven months pregnant and touring with her two-year-old son when they were kicked off a plane, apparently because he was crying too loudly.

For Kristine St-Pierre, bilingual singer-songwriter from Ottawa, travelling with her two children is a huge adventure, made possible because her husband Dave is along to do what dads do. It’s a five-week tour across Canada happening right now, with a breastfeeding eight-month-old son and three-year-old daughter, and Kristine is full of optimism. From Sudbury to Victoria, their five weeks is proving to be hectic and full, but also full of fun. She is breastfeeding, makes sure she nurses her little guy before the show, and has a bottle ready for Dad to administer should her son be needy while she’s on stage. Kristine’s travel plan includes lots of breaks on the road, and spacing out the shows to allow time for the family to explore the places they are visiting, so as to keep her three-year-old daughter engaged. “We’ve been able to entertain them with books and different toys, and by singing songs,” she said. “Thankfully, my kids have been super travellers!”

Shari Ulrich, singer-songwriter from Bowen Island, B.C., has been touring with her now adult daughter since Julia was six months old. Said Shari: “It takes some fancy planning to tour with an infant and toddler, but, there’s no doubt in my mind that the person she has become is due in large part to the people who surrounded her growing up – musicians and singer-songwriters – and learning to adapt and roll with life on the road.  I don’t regret a minute of it.”

Laura Spink and Graydon James from Toronto, (folk-roots band The Young Novelists), write and perform songs inspired by Canadian towns. In 2016, they embarked upon a ten-week tour of North America with their then five-year old son, Simon. “We tour anywhere from 80 to 120 dates a year,” said Laura. “Sometimes Simon comes with us, and sometimes he stays with family. We’re figuring it out as we go.” Young Simon wasn’t a particularly needy child, Laura said, “but there have been times that he’s broken free of the watchful eye backstage … and joined us on stage for a hug! The audiences we play to have been pretty accepting when that’s happened.”

Keri Latimer of Winnipeg-based band Leaf Rapids tours with her two children almost all the time. Hazel (now 12 years old) and Oscar, 10, have been touring since they were three and one respectively, and the family has had a variety of caregivers, including Grandma and Aunt, for tours that have included Australia, Europe and all of Canada. Though the kids now are old enough to sell at the merch table and also join the band on stage for an occasional song, Keri well remembers having to set the kids up with a caregiver in a hotel room when they were little. “It’s basically impossible to concentrate on anything as a mother if your baby is crying for you and you want to be professional… That being said, there have been a couple of instances where my husband, Devin, has put one of our babies in a carrier while he played bass. … Luckily we play folk music, so the audiences seem to understand, and even get a kick out of it!”

Old time roots duo Pharis and Jason Romero from Horsefly, B.C., first toured with their three-month-old daughter in an Alberta winter. “Yikes!” said Pharis, of that first experience. (Is there anything else you can say?!) The couple has gone on to continue to tour with the children since the birth of their second child. “They’ve been all over the place since then,” said Pharis.

Like Natalie MacMaster and Donnell Leahy, it seems that Jason and Pharis, together with so many other musical parents, simply find it easier to tour with the kids than to be without them for weeks at a time.

It’s all about connections. Folk music connects us with our roots. So many of us learn our musical traditions from our family and friends, so it makes complete sense to bring our next generation with us on the road, wherever it takes us.

“Audiences have been super supportive,” said Kristine St. Pierre. “They tell us how great it is that we can tour as a family … that it’s possible to tour with two small kids. This is me … my reality as a mom and an artist, so I’m trying to be more thankful of this incredible opportunity and to embrace the running around, the jumping on couches, the changing diapers on stage … because it’s not going to last long, and I know soon enough I’ll look back and really miss those times!”

Laura Spink said “Getting to spend time with our son and share our love of music is such a special thing. Seeing different cities and meeting different people have sparked the most interesting conversations. I feel like there’s a bond we all have that might not be there if our lives were more conventional.”

Keri Latimer said she has learned a lot from touring with her children: “I love that they are always in the moment. Even when you’re in an airport for six hours waiting for a flight, they are never “waiting.” They are curious and ready to explore any new place, which is a beautiful way to be.”

Hats off to those moms (and dads!) who are keeping their children close, no matter where their music leads them.