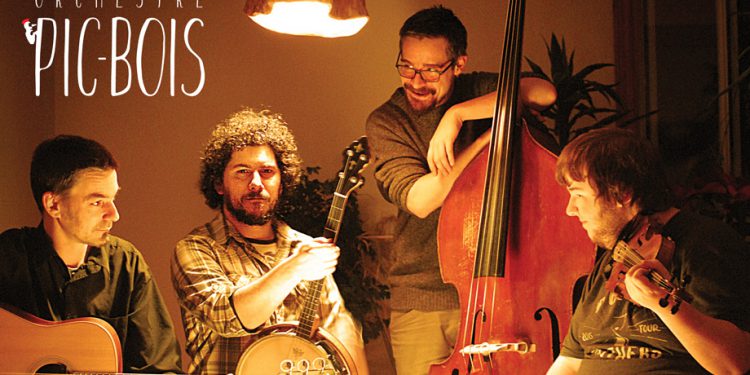 Fans of Québecois folklore are in for a treat around the beginning of June. Jean Desrochers’ new band, l’Orchestre Pic-Bois is coming out with their first album.

Check out one of the tracks here:

Jean Desrochers sure gets around. Multi-instrumentalist, composer and singer, he’s been in more musical projects than you can shake a stick at. He’s studied not only classical guitar in Argentina, but modern rock guitar, eastern European/Klezmer music, reggae, and of course, the traditional folk music of Québec. And, over the years, he has been in many bands that explored all those kinds of world music. He is also director general of CRAPO, (Centre régional d’animation du patrimoine oral de Lanaudière), and recently was appointed as the new artistic director of the Festival Mémoire et Racines, which happens every July in Joliette.

Many of us might also recognize Jean’s contribution to the world of YouTube through the Québecois folklore flashmob series “Commando Trad.” Jean galvanized friends and family and produced the very first QuéTrad flashmobs, bringing attention both at home and around the world to the traditional music of Québec. Views of these short folklore films today number in the hundreds of thousands.

Jean has also been a part of the band “Barbo,” with his partner, fiddler extraordinaire Véronique Plasse, and the amazingly talented pianist, flautist, and foot percussionist Guillaume Turcotte. Another project, Rivière Rouge, explored the extensive connections between Métis music from the Prairies with Québecois traditional music. Wonderful stuff.

“We have tunes that have acoustic roots, but we present them with a modern touch,” explained Jean. “There is what Normand Miron calls ‘Jazz d’Habitants’ or ‘Sugar Shack Jazz.’ There is another in a style we call ‘Punklore,’ and another features a country and western outlook. We even have original compositions.”  The band’s vision is to dress the songs somewhat unexpectedly. It makes the listener sit up and take notice of the modern connections that are being made in the arrangements.

There is a very fun version of “Casse Reel,” from the repertoire of the late Aimé Gagnon. The musicians among us will question one particular note. Should it be G# or G? Well, it turns out that fiddle tradition bearer Aimé Gagnon played it in between. And what’s making those drone sounds?  The fiddle and banjo are actually in vielle tuning, so that multiple strings ring sympathetically when one of them is played, and that sounds amazing with the jaw harp. Cool stuff; so much fun for the musicians to play, and equally fabulous to listen to.

Said Jean: “This recording is largely about the backup instruments becoming the foreground.” All the members of the band brought tunes to the group, he said, and the choices made, whether in tune selection or arrangements, were all done very democratically. “It was a very respectful process, very respectful of the songs and the work.”

The album is in the mixing phase now. The recordings were done with Nicolas’ equipment at the timber home of Jean-Philippe in the beautiful and historic town of Sainte-Émélie-de-l’Énergie in Lanaudière.  “We bonded there,” said Jean, “It was a really beautiful place in the forest, and we became like our own little hockey team with the spirit that we had together.”

Habs, move over. It sounds to us like the guys in l’Orchestre Pic-Bois have stickhandled this disc into the slot, first shot.

Musician moms: a salute for Mother’s ...