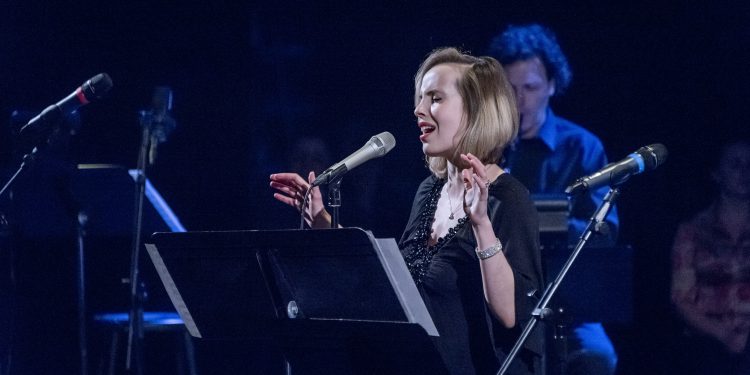 University of Toronto Yiddish Studies professor Anna Shternshis was in Kiev doing research for a book on Yiddish culture during the Second World War.

She was searching through libraries for archival documents to supplement the oral histories she’d collected when she made an extraordinary discovery:  a cache of songs that scholars long believed had been lost to history.

Flash back more than 75 years.

Germany has invaded the Soviet Union, and Jewish folklorist Moisei Beregovsky is leading a team of ethnographers from the Kiev Cabinet for Jewish Culture on a mission to preserve the Yiddish folk songs of that era.  He and his colleagues are hoping to publish an anthology, but instead, Beregovsky is arrested during Stalin’s Jewish purge.  Everyone assumes the songs have been destroyed. But it turns out they weren’t.  Shternshis was holding them in her hands.

And as soon as she realized the magnitude of her discovery, she grew convinced she needed to do something equally magnificent to showcase it, she said.

That brings us to Yiddish Glory: The Lost Songs of World War II, released Feb. 28 on the Six Degrees label and the subject of a lecture and concert in Montreal on May 13 (details at the end of this article).

It is an epic album, featuring vocals by Sophie Millman and a large ensemble that includes Toronto’s renowned David Buchbinder (Flying Bulgars, Odessa/Havana).

In advance of her lecture at Montreal’s Jewish Public Library, professor Shternshis took the time to answer some questions about the project for Roots Music Canada.

One of the key findings in this material is it shows that Jewish Soviet soldiers, some of them amateur authors, continued to create in Yiddish during combat, and as they liberated eastern Europe from the Nazis. We knew that Yiddish culture survived in the Soviet Rear (in places like Uzbekistan and Kazakhstan, where Jews escaped as refugees), but we did not know that Jewish Red Army soldiers were composing music, and their songs are an important insight on how Jews understood the scope of the genocide during the war.

Second, these songs give us a chance to learn about how the women and children who authored the majority of these songs used music to make sense of their experiences. There are songs written by orphans, including one by a 10-year-old whose mother was murdered in the Holocaust. There are songs written by women serving in the army and ones composed by women working long shifts in factories to support the war effort. The songs give us an opportunity to hear their voices directly, something that rarely happens in the context of historical research.

Finally, and perhaps most importantly, some songs provide rare firsthand – or sometimes the only eyewitness testimonies of the destruction of Jews in Ukraine. Some were written as early as 1941, and these represent the first documentation of the Holocaust in Ukraine. Given that we have very few Jewish testimonies of this destruction, these are especially valuable.

After the Kiev Cabinet for Jewish Culture (a department in the Ukrainian Academy of Science) was shut down, the researchers who collected these songs were arrested. The documents were confiscated by the Soviet punitive system and ended up transferred to the Ukrainian National Library. The catalogue was destroyed. After the collapse of the Soviet Union, the documents were rediscovered, catalogued and became available to researchers through the manuscript department of that same library. I do not know many details of what exactly happened with the collection during the time when it was inaccessible, but it is clear that the librarians took great care to preserve papers in the right temperature and in the proper conditions, because the documents are still legible today. The story of the archive is one that reveals the Soviet state first sponsoring academic studies of Jewish music, then imposing oppressive restrictions on free academic inquiry, followed by individual resistance to these limits. Many songs are so-called “motivation” pieces, written by and for soldiers to encourage them to fight against Hitler and his army. Many describe the exact death that Hitler should endure – such as being sliced into pieces. The songs are angry because they blame Hitler, rightly so, for destroying the lives of Soviet people, including, of course, Jews. The hatred of Hitler, expressed in these songs, is raw, strong and emotional. Their authors do not spare curse words. One song, Misha Tears Apart Hitler’s Germany, for example, says that soldiers will drive Hitler away in the manner one chases a wild animal.

Hitler is also an object of ridicule and satire. Many songs in the archive are humorous, sometimes based on the holiday of Purim, including Purim Gifts to Hitler, which compares Hitler to all of the failed enemies of Jewish people, including Haman, who conspired to kill Jews in ancient Persia, and whose defeat is celebrated during Purim, or to Pavel Krushevan, an alleged author of the Protocols of the Elders of Zion. The song promises that Hitler, just like all other enemies of Jews, will end up being killed for his evil deeds.

The fact that so many of these songs rely on humour is significant because laughing seemed to help people to keep their spirits up during horrific ordeals. Many survivors mention in their testimonies that if you can laugh at something, it cannot kill you. Songs indeed include ridicule of German soldiers running away with their pants down and Hitler dressed in funny clothes. Understanding that people wrote these songs during the time when the German army was destroying their cities and communities makes the presence of humour especially poignant and significant.

Almost all of these songs were written by amateur authors. These were mostly women, sometimes children, who witnessed incredible acts of violence and who chose to write music about it, usually to make sense of what was happening to them and to their communities. None of the songs, as far as I know, were performed publicly. As singer Psoy Korolenko, my collaborator on the project said once, “These are folksongs before they became folksongs.” The incredible significance of these songs, as I mentioned earlier, is that they give us a chance to learn from the voices of people who we rarely get to hear in the context of studying violence and conflict, during the conflict itself. These songs helped people manage situations that no human being should ever experience.

On the High Mountain (track 1)

By Veli Shargorodskii, born in Odessa, 42 years old, recorded by Sholem Kupershmidt in the summer of 1944, in Krasnogvardeiskoe, Uzbekistan.

This is one of several songs written by Jewish Red Army soldiers, and [it] describes how they liberated Ukraine. It is humorous, comments on events of 1943-44, and satirizes Hitler’s failed attempts to seize natural resources such as coal and oil, as well as his failure to capture Crimea. Its tone is in stark contrast with “Babi Yar” (track 11), also about a Soviet Jewish soldier, who is filled with grief after liberating Kiev only to discover that his wife and only child were among the 33,771 who were murdered in the Babi Yar ravine (near Kiev) on September 29-30, 1941.

The song was probably written by a Polish Jewish refugee, one of 250,000 who survived the war in the Soviet Union. The song expresses gratitude to the land of Kazakhstan that enabled their survival. One of the lines of the song “Al tire avdie Yaakov” evokes a verse from Jeremiah 30:10 and 46:27, meaning, “’Have no fear Jacob my servant; do not be dismayed Israel,’ declares the Lord, ‘I will surely save you out of a distant place, your descendants from the land of their exile. Jacob will again have peace and security, and no one will make him afraid.’”

This is the only piece on the album that features a newly composed tune; it is one that combines Roma, Yiddish and Romanian styles, to reflect on its internationalist message and proclaims the triumph of humanity. In the song, one of the most powerful passages is where it celebrates multiculturalism and welcoming refugees: “All people are brothers, from one father and one mother. We are all a part of the same family, living in the shade of my shadow together. A Kazakh, and a Kalmyk, an Uyghur, and a Tajik, Korean, Roman Ukrainian, Kyrgyz, Ossetian and a Georgian. Now that you’re here, the family has another member. Please be our welcome guest, your are our brother, dear Jew, even though the enemy hates you so much.”

The song appears twice on the album (tracks 4 and 15) because the piece carries special significance to two vocalists. Sophie Milman’s grandmother survived the war as a Soviet Jewish refugee in Kazakhstan. Milman wanted to draw attention to women’s contributions to the Soviet war effort. Sergei Erdenko wanted to address the plight of the Roma, who were persecuted and murdered during the Holocaust.

Music: Based on the folksong “Ver Zhe Klapt Do in Mayn Tir” (Itsik Fefer and

Beregovsky, p. 132), in a modified version by Valya Roytlender, with instrumental parts and arrangement by Sergei Erdenko.

The song details the grieving of a young child who loses his mother. He walks away from her grave knowing he’ll never see her again and realizes that she will never be able to tuck him in at night. The song probably resonated not only with children, but also with soldiers and other adults who survived the war but lost their parents and grandparents to the violence. Soviet Jewish elders were among the first ones to be murdered by the German army. The feelings of guilt and powerlessness are especially prominent in Soviet Yiddish songs of survivors. On the album, we decided to feature a 12-year-old singer to provide a more authentic listening experience.

I was born in Moscow, into a Jewish family. One of my grandfathers served in the Red Army during the war, two of my grandmothers survived the war in Soviet central Asia, and all of my grandparents were Yiddish speakers. I imagine that all of the experiences described in the songs are relevant to them. But the biggest personal significance of this material is thinking of this project as an opportunity to honour my colleagues: the scholars who collected these songs more than 70 years ago and never received any recognition for their work, and whose contribution to the understanding of Jewish culture in the Soviet Union, and how victims struggled to cope in the midst of a genocide is groundbreaking. They worked under impossible conditions and preserved these materials for us during the war. The Yiddish Glory project is a chance to honour their work and learn from it.