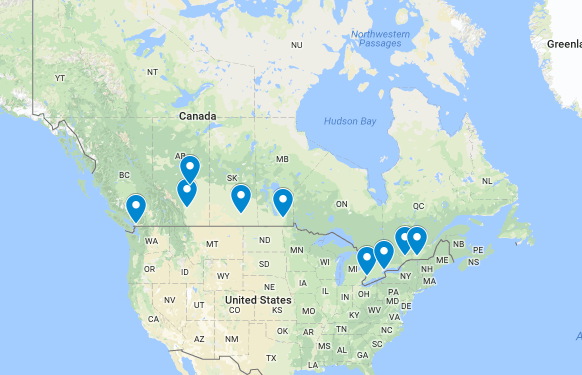 You’ve found yourself with a pass to Canadian Music Week.  Now all you have to do is find some great Canadian roots music to go see – not an easy task when the line-up features more than 800 showcasing artists representing a cross-section of genres, mostly pop and rock.  Even CMW’s crack media relations team was unable to hand us a list of performers by genre.  Fortunately, we here at Roots Music Canada have a resident moose that LOVES listening to new music.  Gordy sifted through dozens and dozens of acts to help find ones we thought you’d love.

We decided to pick a cross-section of artists who are travelling from all across Canada to the festival.  These folks typically play this gig in exchange for a conference pass, and they don’t always get the greatest time-slots.  If you’ve got a pass to CMW, why don’t you check them out?  You’ll be seeing some of the best roots music at the festival, and you’ll be helping to support some great emerging artists.

Yes.  All of those things. Jenny is a classically-trained singer and multi-instrumentalist with an airy, understated and ever-so-slightly experimental sound and a mellifluous voice if I ever did hear one.
May 12, 12:00 a.m. – Cameron House

We love Mariel Buckley here at Roots Music Canada, so much that we already premiered her new song.  But if you missed me saying it on Facebook, this woman is a must-hear for anyone who loves roots country, and especially artists like Lucinda Williams.

If the rest of Havelin’s songs are half as good as the ones on his EP Alright Alright OK, then the 20ish-year-old Alex Zaichkowski is one talented roots pop singer-songwriter to watch.  This single, “Closing Time” – no, it’s not a Leonard Cohen cover – is killer.

Good on you, Edmonton.  You’re so overflowing with talent, we couldn’t pick just one artist from your fine city.  Andrea Nixon is country through and through with a voice and an attitude that hearken back to the golden age of the Grand Ol’ Opry.  “Song Without a Name” is pretty much an anthem for middle-aged women everywhere, and thus, it might be my new favourite song.
May 10, 7:00 p.m. – Rock ‘n’ Horse Saloon

Amy just won the Saskatchewan Country Music Association’s Fans Choice Entertainer of the Year Award, so clearly it’s not just me that thinks she’d be worth seeing live.  Her music is hooky country pop and a lot of darned fun.
May 9, 7:00 p.m. – Rock ‘n’ Horse Saloon

Last year’s West Coast Music Award winner for Electronic/Dance Artist of the Year and and Juno nominee for Indigenous Music Album of the Year, IsKwé seemlessly blends traditional sounds with rock, pop and electronic elements, powerful political commentary, and … that voice!  What a voice!

Jaaji and Chelsey June won the Aboriginal Songwriter of the Year Award at the 2016 Canadian Folk Music Awards and were nominated for five other awards including two Native American Music Awards.  Their combinations of traditional Indigenous sounds, contemporary folk instrumentation, and lyrics in English and Inuktitut are intoxicating.
May 9, 10:00 p.m. – Painted Lady

Sarnia!  Where have you been hiding this guy???  Cory James Mitchell has a gorgeous, gritty voice with just a touch of Steve Earle to it and a country blues sound that’s drenched in feeling … and by the sounds of things, the boy can write a song too!
May 9, 8:00 p.m. – The Great Hall

Let’s face it, there are dozens of great Toronto roots artists at CMW, so picking just one is near impossible … but I did.  Jess Leung is a classically trained flautist and teacher who also performs as a singer-songwriter with a beguiling jazzy vocal style.

Coco Méliès aren’t exactly obscure young indies.  They’re signed to Quebec’s powerhouse Audiogram label, home to bona fide pop stars like Daniel Belanger and Isabelle Boulay.  But if you want to see a polished folk-pop act with great harmonies, look no further.
May 10, 12:00 a.m. – Painted Lady
If you are enjoying this content, please take a second to support Roots Music Canada on Patreon!