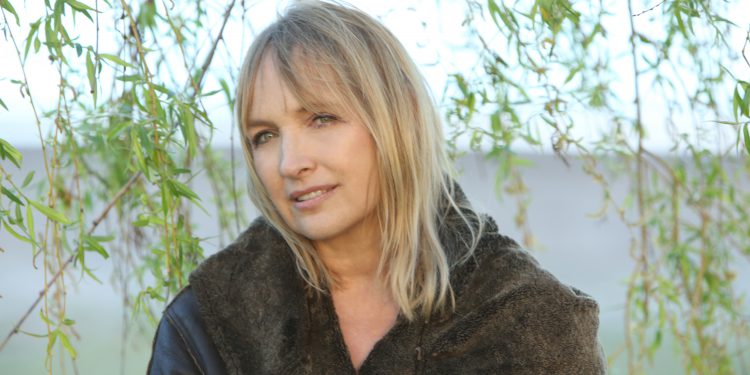 Released in late 2017,  Taivi’s new album Rising Tide is the culmination of a long journey for the Toronto singer-songwriter, while at the same time serving as her formal introduction to the wider folk music community.

Thirteen songs deep and recorded at various locales in North America and even Frankfurt, Germany, the Rising Tide sessions were mentored by Grammy-nominated, internationally renowned bluegrass star Claire Lynch, whose band backed Taivi on the album, along with a few other notable musicians.

Engineered by Nicolas Tjelios (Basia Bulat, Jenny Whiteley, Ken Whiteley,) the album’s foundation is Taivi’s focus on “life and connections” in her writing, with songs such as “Red Moon Rise,” “The Clearwater,” “When I’m With You” (a duet with Nova Scotian Ryan Roberts) and “One More Dance” all packing significant emotional punch.

Taivi took some time to speak with us about the album.  For more information, visit taivimusic.com.

When did you start writing the songs for Rising Tide, and when did you know you had enough material for an album?

I’ve quite a bank of songs not yet recorded – so it was really a question of deciding to make an album. Rising Tide began as a fabulous one-off opportunity with Claire Lynch. It’s “the little demo that grew.”

The seed was a comment I read by Emmylou Harris in an interview, when she said that, regardless of what she was going through, if there was just one more song for her to sing, that’s all she’d need to take her further. Those words spoke directly to me and the song “Get On Home” came out almost effortlessly. I wanted to send her a recording of it as a kind of “thank you.”

I mentioned this to Claire Lynch one day, and she offered to help me out, suggesting that perhaps her bandmates could lay down the tracks. I was thrilled! I then dared to hope that maybe, if these stellar musicians were going to come into a studio for one song, they’d be willing to stay for a second. I chose “One More Dance.”

The vibe, energy and results from the studio lifted me nine feet off the ground. It was like these musicians heard what the songs sounded like in my head and then took them one step further. They were game to try more songs and when their time and schedule permitted did so. It was a lot of fun – aided by great take-out food and an easy-going familiarity. At one point, [bassist] Mark Schatz remarked, “a few more and I believe we have an album here.“ He was right. The album was indeed a rising tide.

What songs on the record have perhaps more significant meaning to you than the others?

They all seem to have their own life, drawing on different threads from my experience. I’ve had a gorgeous time with the song, “The Clearwater.” In 2008, I was sitting at a table in Hugh’s Room in Toronto. Pete Seeger walked out onto the stage, threw his head back and started to sing with sheer joy. I scribbled down what I saw in that moment – “Head thrown back, voice rings out, freest man I’ve ever seen …”

The documentary about his life, “The Power of Song,” had just been released as well, and I’d been struck by his continued pursuit of community and song, his dogged commitment to remain true to his values, regardless of the darkness or fear this invoked, and his role in leading the Hudson River clean-up with the building of the Clearwater sloop. What a way to live, and what a legacy he’s left. Whenever I have a chance to perform that song about Pete Seeger, it feels like a direct contribution to the good.

Another song, and one that a friend of mine swears by, is “Roses & Thunder.” She hears it as an incredibly authentic expression, albeit allegorical, of the journeys we go through. The song came to me through images, somewhat like a story already written. But it’s been a challenging one for me to deliver. Even the recording process for “Roses & Thunder” was an odyssey – Toronto, Nashville and Germany – all the while seeking its groove. If the songs were children, this would be the child who needed that extra attention.

How did it come about that the album was recorded in so many different places?

The recording took on a life of its own. We just did what was needed to record the songs with available dates. Claire Lynch and her band members would be touring in Germany or rehearsing in Nashville, and there was no shortage of good studios, so geography was not an issue. I was lucky to have Nicolas Tjelios here in Ontario, who was a whiz at communicating with engineers in different locales and integrating the various takes and developing a common sound. It all felt seamless for me, and exciting to be recording in places like Ken Whiteley’s or Scott Merritt’s studios in Ontario, and Todd Phillips’ and others in Nashville. The experience of working at Klangetage, a cutting edge studio in old-town Frankfurt, was definitely a highlight, along with recording Ryan Robert’s vocals on “When I’m With You” at Main Street in Kentville, Nova Scotia.

Could you say more about your relationship with Claire Lynch and what she brought to the recording process?

It was like having the brilliant big sister you always wanted – really nice, really smart and generous with her time even with her packed touring schedule. I could see how she could keep a band together on the road. Claire would listen deeply and then get to the heart of a matter, knowing when to engage and when to step back. I couldn’t have asked for a better mentor. And that vibe was reflected throughout her band. An awesome team – always raising the bar for me.

What role does your Northern European background play in your sound?

I suspect that part of my soul hangs out in a place where the sun doesn’t fully set in the summer and the winds blow across the northern seas to rocky shores lined with birches and evergreens. Arvo Pärt’s spacious, pensive classical works reflect this so beautifully, weaving together the spirit and the environment.

One of my all-time favourite pieces is a song about the awakening of the land in the springtime entitled “Already, the Wild Marigold.” It’s a gorgeous standard – reminiscent in ways to Cole Porter and Gershwin – but written in the tiny northern country of Estonia in 1892. Its melody, chord structure and lyrical poetry are timeless.

I’m sure that the music from the first years of my life has been an unconscious foundation for what I’ve been drawn to since, serving as an aspiration and a compass. My parents brought a rich musical heritage when they landed in Canada – singing was like breathing for them.