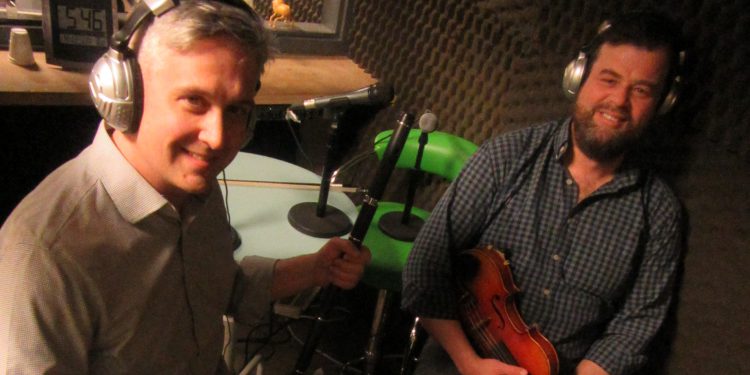 Ross Griffiths and Dan MacDonald in the studio at Radio Regent in Toronto. Photo by Paul Corby.

Out of the thousand or so MacDonalds living on Cape Breton Island, probably only half of them are fiddlers. Dan MacDonald settled in Toronto “for the duration” sixteen years ago, so now there is one less. But they do proliferate. And thrive.

“My father was a fiddle player, and my grandfather, and my older brother Sean, so we sort of had no choice about it,” said Dan, who began his professional life by touring internationally with his family band, Scumalash, as a boy.

Since his arrival, Dan`s mastery of his instrument`s vocabulary and a lifetime of teaching and absorbing, as well as his easy-going style, have proved to be a unifying force, not only for Toronto`s Cape Breton community, but also for the widespread Scottish and Irish folk that gather in town at Dora Keough`s, the Bow & Arrow and everywhere “from Scarborough to Port Credit and beyond.”

“There’s an Irish session in Toronto almost every day of the week. But the Cape Breton thing is, we don’t really have regular sessions.where we play together,” he said. “People play on their own because we’re so spread out. But there was plenty of Irish, so you end up learning scads of Irish. Plus they’re a very welcoming community.”

His new solo record, Rural / Urban, (at danmacdonald.org and iTunes) is a document of the mushrooming of his musical and personal purview over these past years in Ontario. It works the resonance of the tradition handed down from his father into a vivid confluence with new sensations that he’s drawn from cities the world over. Having travelled through a dozen countries since leaving home at eighteen, Dan’s experiences have added a new horizon to his heritage sounds. “It’s meant to be a record of everything that I’ve encountered musically and stylistically, and the people – mostly the people – that I’ve encountered and played with over the years, especially people in Toronto.” As a result, many of the titles given to the medleys on the disk are the names of famous fiddlers, mostly with Cape Breton lineage.  The album is totally acoustic and altogether airy-sounding. Although Ed Woodsworth brings the double bass into play on three tunes, especially the driving Carl and Michael Coleman-inspired piece, most of the low end is sustained by the pianist`s left hand and the occasional cello. There are also all kinds of MacDonalds in evidence throughout.

The record opens with a series of classic pieces blended into sets in the parlour-to-kitchen tradition, with piano and guitar, or strings alone. Dan alternates between the lilt that brings the Cape Breton fiddle such a superb protestant dignity and the furious flurries and gruff backbeat of the dance repertoire as he digs into the back end, the “frog”, of the bow. He ramps up the piquance with his astute addition of Cameroon émigré and teacher Njacko Backo on kalimba for two tracks, with conga drum accompaniment.

“Njacko and I were teaching up at Algoma Trad, up near Sault Ste. Marie. We really like the same type of ideas with music, and I tried my best to learn his music, and I kept thinking that I’d love to teach him some of mine. He’s an intense guy. He’s got a lot of music in there. So I went over to his house, and we learned an E minor Irish jig for the record.”

Newfoundland’s virtuoso guitar player Duane Andrews also shows up on “E Flats,” a swinging hornpipe with an interval-hopping melody, and there are flavourful bouzouki and highland bagpipe dressings provided on a few tunes by bandmates Brian Taheny and Ross Griffiths as well. Album closer “Scottish Aires” summons the lonesome shoreline of shale and Atlantic salt that separates Scotland and Cape Breton Island, but also unites them. It’s some sweet all together.

You can find Dan MacDonald playing every first and third Thursday of the month at the Brogue Inn in Port Credit.