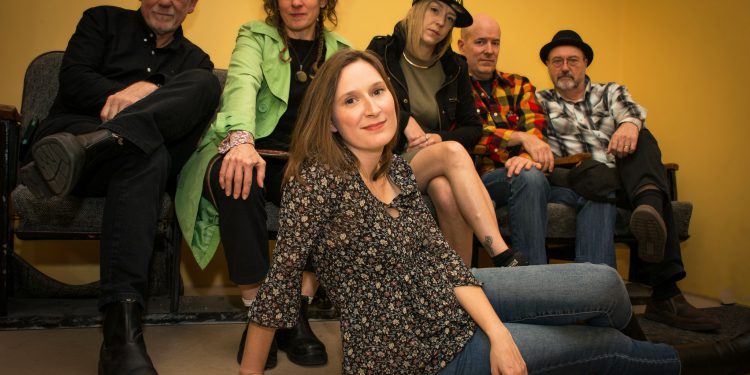 Roots Music Canada is proud to premiere the whimsical new video for “Cecil Street,” one of the standout tracks from Collette Savard & The Savants‘ self-titled debut album. The song was inspired by Toronto’s Kensington Market, and anyone familiar with the neighbourhood will recognize it in the video.

After releasing three independent albums with her former partner, John Zytaruk, Collette Savard was determined for her next project to expand her scope by connecting with some of Toronto’s most experienced, dynamic and creative musicians. The results are a brilliant folk-jazz-blues hybrid showcasing not only Savard’s own highly affecting performances, but the contributions of the aptly named Savants: backup singer/percussionist Rebecca Campbell, bassist and producer John Switzer (both former Jane Siberry collaborators), drummer Martin Worthy (musical collaborator with the late author Paul Quarrington), guitarist Tim Posgate, and keyboardist Megan Worthy.

These songs were written throughout a period of great upheaval in Savard’s life as her 13-year marriage and musical partnership came to an end. She channeled the mixture of emotions that came from that time into songs like “In Over My Head” and “I’m Counting On You Heart.” Ironically, the latter song (about embracing the strength of one), was the first tune Rebecca Campbell happened to catch during an open mic at Toronto folk music hub the TRANZAC, where the pair are part of the board of directors. This proved to be the catalyst for Campbell to help Savard form the Savants and ultimately make the album a reality.

Although Collette Savard & The Savants was born out of deep sorrow, Savard views it as a testament to optimism and empowerment. As the band began gelling, it allowed her to try on some different musical hats, as on the Stax Records-influenced “It Shines,” and the Steely Dan-esque “Last Cigarette.” Overall, anyone familiar with Savard’s previous work will likely be surprised by this new effort, which in the end became precisely her intention.

“These songs all have a thread of light-heartedness and really speak to how the struggles they describe aren’t some sort of anomaly with me but just things everyone deals with,” she said. “The song ‘Cecil Street,’ for example, has a line that goes, ‘This is the human condition, this is the state of our times, no matter what you’ve been given, no one escapes worry all the time.’ I wrote that with the idea of ‘worry’ being something tangible in my mind, like a mob boss always trying to shake me down. That sounds terrifying, but really it was my way of turning anxiety into a cartoonish villain.”

Originally from North Bay, Ont., Savard started singing as a very small child and at the age of 12 learned her first three guitar chords. By age 19, she was seriously writing and performing her songs, and in 2005 she released her debut album with Zytaruk, entitled Most Improved Cheerleader. Savard released two more albums—2008’s Zen Boyfriend and 2012’s Best Dress—displaying influences ranging from classic country and French chanson to Joni Mitchell and Lucinda Williams. These first three records also featured some of Toronto’s most celebrated musicians, including legendary jazz trumpeter Guido Basso, saxophonist Richard Underhill and keyboardist Bob Wiseman. Her main goal always has been, and continues to be, never to repeat herself. Collette Savard and the Savants certainly displays that philosophy and has kicked open the door even wider for further experimentation in the future.