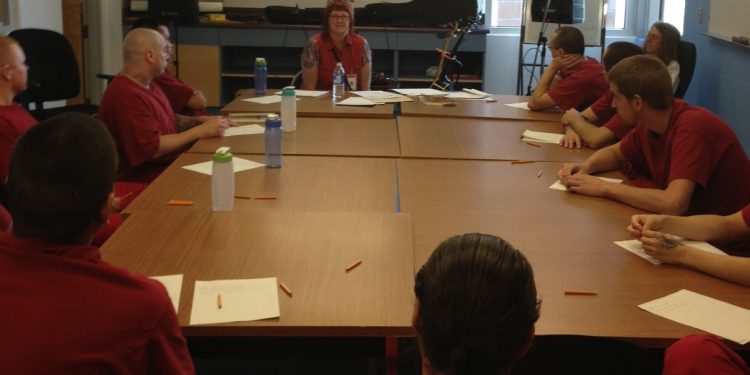 An Express Yourself Writing Workshop in 2012

In the first parts of this article I talked about how our work with inmates began and our first visit to New Folsom Prison. The last part will focus on how our workshops have evolved and where they have taken us.

Life sure is unpredictable. I never would have believed that James and I would be working with men and women in maximum security prisons and that, after a year, these life-changing experiences would lead us to create Express Yourself Writing Workshops.

There’s a terrific winter festival called Coldsnap that takes place annually in Prince George. I was performing there in 2012 and was asked to participate at a youth drop-in at YAP (Youth Around Prince). It was an open mic event, and I was blown away by how good everyone was. There were young singers, songwriters, poets and storytellers, some filled with angst, some nervous, some undeniably confident and all incredibly powerful.

Sue Judge, Coldsnap’s artistic director, had also put me in touch with Rob Richard the assistant deputy warden at the Prince George Regional Correctional Centre. We held workshops with both the men and the women there, and again, were met with respect and gratitude.

During the morning workshop, one of the writing exercises brought up some tough memories for one of our female participants. The warden mentioned she would arrange a counseling session for her to work through some of the things that had come up during the workshop. Since then we always make sure there is a counselor or staff member present. The Nebraska Correctional Center for Women

From 2011 – 2016 we worked our proverbial asses off. I was performing 120-150 shows a year all over the US, Canada and Europe. I figured we could also do workshops in the areas I was performing in and got down to the business of researching and contacting facilities. But booking these workshops was a tremendous challenge. There is no information portal where one can find facilities that offer arts programming. Thank goodness for the internet. Thankfully, the more workshops we do and the more recommendations we receive from the program directors, the easier it gets.

Here is an example:

Tim Miller, assistant warden, Nebraska Correctional Center For Women
“I can’t explain how James and Linda can unlock a heart that has been shut for so long and make it put life, goals and dreams on paper and back into the forefront of the mind. I can’t explain it, but I have seen it happen. It is done because they would rather funnel hope back in.

In the early days we presented our workshop on a volunteer basis. After a year, we felt we had something to offer and started to charge a fee to cover our travel expenses, and as the years go by, I’m finding we are more in demand. I have also been teaching songwriting at music camps, festivals, arts organizations and was recently an instructor at the Banff Centre for Arts and Creativity.

In 2015 we were again invited to New Folsom, this time for a concert in the psychiatric security unit. James and I were lead into a room with eight cages, or therapeutic modules as they are officially called. We set up my gear facing the cages and went to the guard’s station to await the inmates. Oh and by the way, we were wearing bullet proof vests. Name tags made for one of our workshops, Ellensburg, WA

After a few minutes, eight inmates were lead past us all chained together at the ankles and handcuffed. They stopped just outside the room and one by one were unchained, taken into the room, put into a cage and uncuffed through a slot in the front of the cage. After the last one was inside we were told we could go in. It was nerve-wracking to say the least but we both tried to be as normal as possible.

We talked a little about our journey and then I played a few songs. One of the men said he had played in bands “in another life”. Everyone listened and asked questions. All this time I noticed the fellow to my right was sitting on the floor with his back to me.

When I started playing the banjo, someone asked me about it, where it came from, etc. I explained that it was made by a fellow by the name of Bart Reiter, a maker from Lansing, Michigan, and that it has eight f-holes and checkerboard binding on the back, which no one ever gets to see unless I show it to them. I walked over with the back turned out and went around the room showing it to each inmate.

By the end of the concert, the man who had ignored me pushed a piece of paper out through the top of the cage and asked for my autograph. When I asked the program director about his reaction, he explained to me that he associated the banjo with racist music and thought I was racist. Once he realized my music wasn’t about that he warmed up. I can’t explain it, but after about 10 minutes or so, those cages disappeared. It was almost like it was normal. That’s the power of music and showing people you care.

We have facilitated over 140 workshops with over 2000 people to date, and while each workshop is very different, we have found one common thread running through all of them. Everyone wants to be loved. Even in the most unfortunate circumstance, we have heard so many times, “I wish my mom (or dad) loved me”.

Here are some of our participant’s writings: “I’m not a writer but I was shocked at the things I wrote and how they flowed. “

“Thank you so much for all of the prisoners you have influenced. God bless and protect you always”.

“Made me feel comfortable to share my writing without being scared of being judged. I wish we had more time. I could do it all day. Thank you so much for giving me this experience”

Hope you’ve enjoyed reading this story. If you would like more information on Express Yourself Writing Workshops please visit https://lindamcrae.com/workshops.