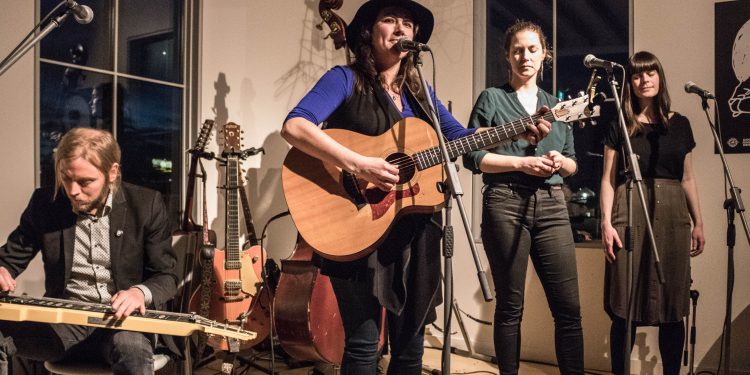 In my years of reviewing music events, this was perhaps the most difficult assignment I’ve received.

Gordy the Moose:  Ashley Condon is launching her latest album, Can You Hear Me. She also owns her own microbrewery, Copper Bottom Brewing, which has recently opened in Montague, PEI., and the show is there.

Bob:  So should I review the new album, the show, the new brewery, or the beer?

Contrary to popular belief, I am not normally a heavy drinker, even though I just had a conversation with a moose. But I felt up for the job, as I’ve recently grown a trendy craft beard, and I’ve been a fan of Condon’s for several years. All I had to do was taste some beer, watch some music, enjoy the atmosphere of a small-town, East Coast taproom, and stay sober enough to take it all in. What could go wrong?

Wisely, I chose to attend the second of the two nights set aside for the launch. The Saturday show had sold out in moments, so I figured the hastily-added Sunday show for the spillover ticket buyers would be less rowdy, and not as packed. As it turns out, either people in Montague are fine supporters of live music, or Sunday is the new Friday for drinkers. You might have been able to shoehorn a handful more into the pub’s spacious event room, but this was a crowd most venues in Toronto or any other city would be thrilled with on a Sunday. It was a tough assignment, but Bob Mersereau, pictured here with Ashley Condon, stuck it out and reviewed her show while sampling the wares at her new brewery, Copper Bottom Brewing. Photo by Pamela Detlor.

Copper Bottom Brewing came about thanks in part to inspiration, necessity, and the combined passion and know-how of Condon and her husband, Ken Spears. Condon had spent the past decade making albums, touring North America, and enjoying some craft beer while doing it. Spears worked as an electrician, all the while working toward his dream of opening his own microbrewery. A couple of years ago, a lightning bolt idea hit the couple.

“The brewery was Ken’s dream for years, so he was working on his own and seeking out other business partners,” said Condon. “Then it occurred to me that this was something we could do together, because we had talked about having a taproom and an event space as part of the brewery as well. And I could see how my industry connections and my desire to be a curator of art as well as being an artist would work, and all of a sudden we were working together. And we’re a good team, because he’s a great brewer, very hands-on, mechanical, very much a thinker, and I’m fire and passion and art, and it really serves us well.”

The plan was to stick close to home, and who can blame them? Montague is one of those classic PEI towns, some 6,000 souls and as picturesque as they come. The brewery is smack in the centre of town, holding a commanding spot on a curve on Main Street, overlooking the harbour on the Montague River. The couple spent months renovating the old town hall, bringing back to life one of the community’s most important buildings. They’ve already created a tremendous amount of goodwill with their neighbours. Ashley grew up in the area, and the couple live about 10 minutes out of town. The brewery was the dream of Ashley’s husband, Ken, pictured here. Photo by Pamela Detlor.

The beer-making (Ken’s passion) takes place on the first level, while the second storey features the tap room, which is open daily, plus the performance space, which has live music and events several times weekly. There’s the Tunes On Tap series on Sundays, featuring such local hotshots as Richard Wood and Ward MacDonald, and Weekend Warmup gigs every Friday, another showcase for the many strong Island performers. They’ve hosted major national touring artists, such as Juno winners The Fretless and Newfoundland’s Matthew Byrne and Sherman Downey. Saturday, Apr. 21 and Sunday, Apr. 22, it’s the David Francey Art Tour, with Francey’s paintings and Islanders such as Dylan Menzie paying tribute by performing some of Francey’s songs. Francey happens to be Condon’s mentor and biggest fan as well.

My careful planning started to go off the rails early on. The performance room has a mix of chairs and tables, and instead of sitting and waiting for the music to start, the crowd was mingling, chatting, greeting neighbours and friends from across the Island. I recognized friends as soon as I walked in, crowded around the taps — obviously, as they were musicians. Dale Murray was there, Condon’s producer, playing guitar that night. Mark Geddes was smiling wide, there to play bass. Rachel Beck, she of the recent #1 track on CBC Radio 2, “Restless Heart,” had come back to her hometown to open the show for her friend, and Condon’s pal in the side-group The Eastern Belles, Catherine MacLellan, was on hand to lend harmonies. That called for a beer.

On tap that night were three of the Copper Bottom specialties, and I began with the Rabble Rouser Red, bold and crisp I noticed. My beer-reviewing skills were well-engaged when Beck took the stage for her set, when I ran into our landlord Ken. He wanted me to try the Broadside, a classic pale ale, hoppy with a distinct citrus ending. This seemed easy so far, except Rachel had finished, and I noticed I hadn’t paid much attention. That’s okay. I can talk about her another time. This was Ashley’s gig. Meantime, the crowd was up and mingling again, and I recognized some old colleagues from back in the day, which led to a fine chat and a decision to try the Centennial Stock Blonde Ale, which was, I dunno, blonde and tasted real good and went down easy and fast. That’s when I remembered Ashley had asked me to introduce her, so I steadied myself and walked to the mic. After explaining that I worked for a moose, I proceeded to ingratiate myself with the locals by telling them my grandfather had been manager of the Bank of Nova Scotia in nearby Murray River back in the ’30’s, and my mother had grown up there, so we were basically cousins. This is the kind of info that goes over big in the Maritimes, and I’m pretty sure I am now considered an integral part of the community and can vote in municipal elections.

Condon’s story alone is worth a dozen features (her mother was a lobster fisher), and her new album reflects all those stories, especially the small town living she’s embraced. “Diamond Sky,” co-written with MacLellan, is about her getting out of Toronto and moving back home, knowing that the big city lights only obscure the stars so easily seen on the Island. “Long Long Moon” is that required Maritime sea ballad, a lover lost to a rogue wave. “The Rain” is a tribute to farmers, just as plentiful as fishermen on PEI.  More honest, hard work. Kind of like running a brewery, I figure.

Nobody seemed too keen on leaving after the first set, so I spent the break regaling a new friend with more tales of my mother and her Depression-era activities (“I’m not old enough to remember that,” said the slightly-indignant senior I was attempting to charm). That called for another Centennial, which I had by now decided was the finest beer on tap that night. Meanwhile, Condon was back up for more, including “Down Home,” which is what we call it around here. Then she did some older material, which seemed like a good time to get another Centennial, which has to be the finest beer on tap, if I hadn’t mentioned that yet. Condon exudes warmth, from both her vocals and her personality, and I took that to mean I should hang around after the show as long as Ken kept the taps open.

My reviewing plan was still somewhat intact, except I had forgotten one important piece of information, and you might want to remember this if you find yourself in a similar situation. For musicians, Sunday is their Friday night, as the work week is done and Monday is usually a day off. They are more than happy to stay up and watch amateur beer reviewers attempt to discuss the fruitiness of IPA’s, and how a good beard affects the taste of a red, and how spring is late this year because of Trump.

Finally my designated driver/photographer suggested it was time she got me back to my lodgings for the night, although others said they were willing to take up a collection if she would drive me back to New Brunswick instead. I reluctantly agreed, as the Moose had set Monday as my deadline. It’s currently early Thursday morning as I finish this, and I now realize I missed a day or two this week, and it feels like I brushed my teeth with the cat. Anyway, Ashley Condon’s Can You Hear Me sums up the joy and strength one feels embracing your hometown. Ken and Ashley’s Copper Bottom Brewing is an example of how to build strong community ties, and Centennial Stock Blonde Ale may be the finest beer on tap anywhere, if I haven’t mentioned that already.

Bob Mersereau is a professional music writer and amateur beer reviewer from Fredericton, N.B. Pamela Detlor is a really great photographer and a very patient human being who served as Bob’s designated driver for the night.
If you are enjoying this content, please take a second to support Roots Music Canada on Patreon!