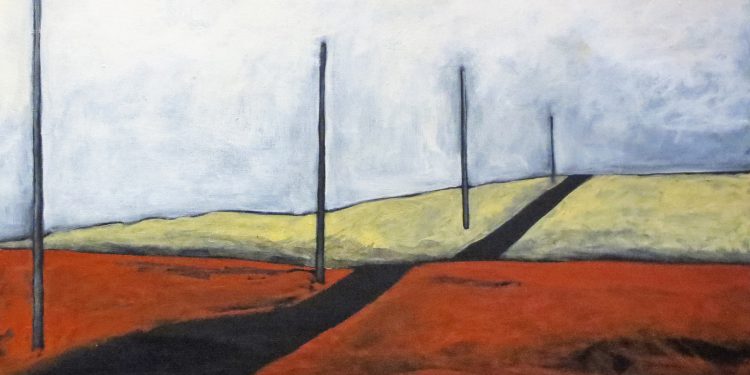 Beloved Canadian singer-songwriter David Francey is embarking on a different kind of tour to launch his brand new album, the Broken Heart of Everything — which comes out tomorrow, by the way.

He’s travelling with an exhibit of his paintings.

David is currently resting his singing voice after losing it shortly after recording the new album — the temporary loss of singing voices being a well-known hazard of life as a professional singer.

So instead of performing his new songs, he’ll autograph copies of his recording of them while fans enjoy this whole other side of his artistic personality.

David’s paintings, at least to me, have parallels to his songs: they have an apparent simplicity that belies their depth, and many of them portray the environments — both physical and emotional — where you might expect to find the characters from his lyrics. There are lots of rural and industrial landscapes and images of life on the water.

It will come as no surprise to those who have attended David’s concerts and listened to his stories about his wife, Beth Girdler, that Beth was the person who first encouraged David to paint.

Beth is a biologist by training and a talented photographer and watercolour artist.

“I’d always drawn a bit and tried watercolours with her encouragement,” David wrote in a message on Facebook messenger.

But he found them challenging, so he switched to acrylic, “a much more forgiving medium,” he added.

“My first canvas was a disaster. I was lost on the blank white canvas. I overpainted it with black and started again. I knew exactly what I wanted to do, could figure out how to do it. I’ve never stopped painting since. When I’m not writing, I paint.”

David has been painting for almost as long as he’s been performing, and, suffice to say, his canvases quickly evolved from the aforementioned “disaster” to the heavily evocative and moving works he produces today.

“It took time before I let anyone else see them,” he said. “I just painted for myself.”

Just as David turned out to be an unlikely folk star — he was a manual labourer with no aspirations in the music business when he was thrust into the spotlight in the 90s — one might argue he is an equally unlikely success as a painter.

He is colour blind.

But, if that has any impact at all on his canvases, it appears to be to make them more interesting.

“I’ve never let it stop me.” he said. “I know what colours I like to see together. It is a limitation not being able to mix colours to create others, but like any limitations I like to think they can be lived with and overcome to some degree.

“It’s an odd affliction,” he added, “but so much of a painting is design; it’s no reason not to do it.”

David Francey art tour dates (for venues, contact the local organizers listed on the individual Facebook events for each show)