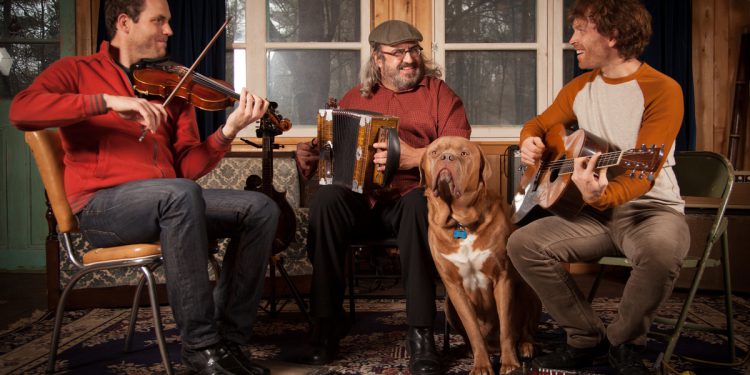 Yves Lambert's new album, tentatively titled Lanlire, should be available in early July. No word on whether the dog makes a guest appearance.

The legendary Quebec accordionist Yves Lambert has some new musical temptations in store for us in the next album, being recorded now by the Yves Lambert Trio. It promises to bring us yet again, the best in wicked Québecois musical black humour, exploring the multiple human temptations of carnal pleasure, abuse of power, and drink.

Speaking of power, it is a powerful, charismatic live performance that Yves Lambert brings to festivals and concert halls all over Canada and the world. With his accordions, melodeon, harmonicas, jaw harp and whiskey-voiced vocals, Yves is one of the three founding members of La Bottine Souriante, today a large touring folk ensemble that showcases Québecois music around the globe.

Yves, together with André Marchand and Mario Forest, founded La Bottine in 1976, and though none of them remain with the band today, the legacy they created lives on. Most of the top players of traditional Québecois music are either in the band today or have been members of La Bottine Souriante, including Michel Bordeleau, Benoît Bourque, André Brunet, David Boulanger, Eric Beaudry, Daniel Roy, Lisa Orenstein, and Pierre-Luc Dupuis.

La Bottine founders Yves, André and Mario created something that is perpetual and unstoppable. Two years ago, the Festival Mémoire et Racines, the biggest folk festival in Québec, did an amazing tribute on their Saturday night main stage: La Bottine Souriante then and now. Yves was truly in his element, playing his accordions and harmonicas with power, passion and musical precision. It was wonderful to see and hear original members of the band playing tunes from the older repertoire, and then being joined by the current members, forming a truly wonderful Québecois big band, with a great wall of traditional music sound for the ears of those in attendance.

“They are both true masters at my side,” said Yves. “I consider myself very fortunate to work with these two ace musicians. Their musical know-how, along with my curiosity, experience and crazy ideas allows me to ‘hang ten’ on the front edge of the artistic wave.”
It seems like a good idea. Put two of the best young musicians in the province together with a legend, shake the box, and see what comes out.

What’s about to come out of that box is bound to be fabulous.

Yves’ vision for this new album is greatly inspired by the biblical theme, The Temptation of Saint Anthony. Many great artists over the centuries have been inspired by the story of the Temptation: Max Ernst, Hieronymus Bosch, Michelangelo and Salvador Dali, to name just a few. And, in literary circles, the story also appears, particularly in the writings of Gustave Flaubert.

Said Yves, “I couldn’t be in better company!”

“For me,” he said, “this theme is a nature study, a view of humanity through the lens of its strengths and weaknesses. From sacrifice and sin, to pleasure and regret, with sacrifice integral to pleasure, there are plenty of paths to take.”

“It is in this spirit,” he continued, “that I have developed the ‘happy’ concept that will imbue this next album, featuring temptation in all its forms, carnal pleasure, abuse of power, the power of drink,” and surely other vices that we humans can conjure for ourselves.

Yves also spoke of his musical collaborators: “As for the music itself, it is the fruit of a fifteen year collaboration with Olivier and Tommy, two extraordinary musicians with whom I have developed a powerful complicity. We are driven by a common understanding of the importance of tradition in the face of the broad mainstream musical trends of today.”

The album will include a joyful call and response song about lawyers who exercise their bourgeois privileges around sex and champagne. And then there is another where the devil comes to earth on the prowl for dishonest folks. It’s sung in the style of a protest song. “[It’s] All the more relevant today,” said Yves, “because of what we see in the daily news.”

Setting traps for Beelzebub is the motif of another song where the common folk get to exercise their own brand of power to unseat the devil himself. In another song, the real-life history of the Prohibition era Intemperance League is illuminated in the story of a family burdened by a drunkard. A local priest makes an appearance as well in a song that laments his travails in the modern age. “It’s another story which remains valid to this day,” said Yves.

The famous and captivating La Bolduc makes an appearance too, in a politically biting song she wrote in the same vein as Woody Guthrie, during the depression. Since some of the same political themes persist today, revisiting this material seems very timely indeed.

The album would not be complete without a bunch of lively instrumentals, so Yves, Olivier and Tommy let loose with a medley of Québecois traditional reels, as well as a group of Cape Breton tunes and an Irish number in the John Doyle ‘DADGAD’ guitar style.

Yves’ playful spirit is bound to be in full attendance in this new album. His mischievous and provocative approach to music and life never fails to get our attention. Since sacrifice is integral to pleasure, we will wait with bated breath for this one.

The new album, tentatively titled Lanlire, hits the streets in early July. You can help fund it through the band’s Indiegogo campaign.