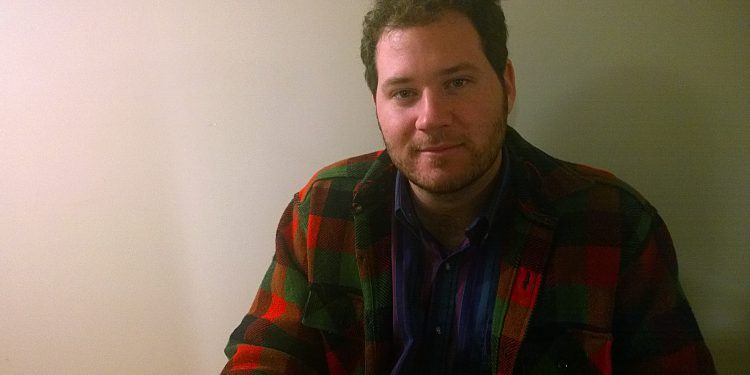 With his debut solo album, Toronto-based singer-songwriter Dave Allen has established himself as a bona fide roots music auteur, transporting us to a place that, to our modern perceptions, will seem uncomfortably foreign, or conversely, all too real. Listeners previously heard flashes of Dave’s brilliance in his previous work with the Barrie, Ontario collective Stonetrotter, but on When The Demons Come, he takes full command in bridging his wide-ranging country, folk, blues and gospel influences.

Recorded at various locations around Ontario over the course of a year, the album in fact gathers a decade’s worth of material Dave had accumulated, which had not found a home within other various projects. Still, there is a common thread of sin and redemption connecting all of the songs, and through the assistance of several of his Stonetrotter band mates and pedal steel virtuoso Aaron Goldstein, it adds up to a haunting and endlessly rewarding listening experience.

Songs such as “Plainview” — recently featured in the CBC drama Burden Of Proof — “Saint John,” and “Oak” sparkle with the instrumental interplay of The Band, blended with the brooding soul of Bill Withers and the pop inventiveness of Harry Nilsson. When The Demons Come is truly an album that rewards repeated listening, revealing more of its nuances each time. As a staunch DIY artist, Dave was determined to apply all of the technical skills he has learned along the way to making his first solo effort, combining them with themes of loss and spirituality he has grappled with for much of his life. To call When The Demons Come a labour of love is an understatement. More accurately, it is a place where both the dead and living can co-exist, sharing their stories and finding peace in doing so.

“Part of the reason I decided to record it myself was because I knew I’d have the freedom to experiment without being on the clock,” Dave said. “My approach to writing and recording can be all-encompassing. When I’m inside of a song, I can stay there for six hours on repeat, sorting through my thoughts and feelings and melodies and chords. Some of these songs took years to craft, some came out in minutes. I think in the end, I really wanted to showcase these songs in their most elemental and vulnerable form.”

In a sense, that attitude echoes Dave’s first experiences with music as a child, learning classic ‘60s and ‘70s folk-rock songs from his parents. He gravitated to punk rock by his teens, joining a ska-influenced band, and making some early attempts at home recording. Later, when attending college, he was pulled back to the music of his youth, becoming totally immersed in it this time.

“I loved discovering new old music,” Dave said. “I felt more of a connection to it and a good amount was familiar to my ears because of my mom and dad’s taste in music growing up. A friend also bought me Alone, the Rivers Cuomo album of his demos and home recordings. I totally understood where Rivers was coming from, and listening to it felt like a door was opening. I’d been doing the same thing in my home throughout my teens, and knowing that Rivers started out in that way before forming Weezer encouraged me to keep going.”

Following a stint with a pop-rock band in St. Catharines, Ontario, Dave returned to his hometown of Barrie and began connecting with the musicians who would eventually comprise Stonetrotter. The group made two EPs before releasing its self-titled independent full-length album in 2015, described at the time by Jim DiGioia of the blog Quick Before It Melts as, “an effortless blend of cool country, simmering soul, swampy psychedelia, and biting barroom brawn.” The album would go on to spend 15 weeks on Earshot’s national album charts, and bring the band shows with Zeus, TUNS and others. Dave credits the work he’s done as a member of Stonetrotter with giving him the confidence to pursue the specific vision he had for When The Demons Come and execute it on his own. It’s just the beginning of what is sure to become an impressive body of work in the future.

“I’ve always been a fan of DIY culture, and I’m naturally inclined to take on projects where part of the creation process is also learning to create,” he said. “For When The Demons Come, I used everything I knew, and relied heavily on my ear. I enjoy working this way, and right now, at least, I plan to approach my next record with the same DIY mentality, and further develop my skills in terms of home recording and producing.”

Indeed, by any measure, When The Demons Come is a uniquely personal work of art, and a powerful introduction to one of Canada’s vital new musical voices.

City profile: a songwriter’s view of ...