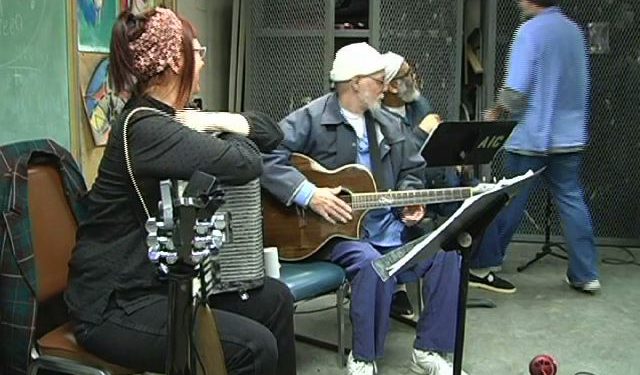 Playing with a few of the guys in the “in house” blues band at New Folsom. Ken, sitting in front of me, is the fellow who wrote the lyrics for Flowers of Appalachia.

Prisonpro.com says:  “California State Prison in Sacramento is a multi-level institution, which primarily houses maximum security inmates. The original reason the prison was built was to house the most dangerous and difficult inmates in the state. Now the facility not only houses maximum security offenders, but also has level I minimum security inmates. The facility also contains a stand-alone administrative segregation unit that is surrounded by a lethal electric fence. Only inmates who are considered a management problem are housed there.”

Yikes! That gives you an idea of how we must have been feeling upon entering New Folsom or California State Prison – Sacramento as it is also known.

After a total of four check-points and a seemingly endless snaking hallway that wound through the office area, three guard stations, and the A Yard infirmary, we found ourselves in a breezeway with barbed wire gates that separated two recreational yards where some of the inmates were hanging out.

Much to our shock, the breezeway contained six “therapeutic modules” (steel cages) just large enough for someone to stand in. A stainless-steel stool stood in the middle of the cage, which also had a slit in the front to pass a food tray or to remove handcuffs if they had been used to control the inmate. I looked over to see a man looking out at us from behind the bars of his cage, having been put there for a cooling off period for some infraction he had committed. There were three more men in the same situation as the first. It was weird to say the least. I smiled and said hello and kept on walking. James and I would be introduced to these cages in another setting a little later in our story.

The music room where we held our first songwriting workshop was just to the right of one of these modules. The room had a few posters of some of the people who had also taught there, and there were wire cages on two walls where the musical instruments, tables and chairs were stored. The inmates earn the right to receive special privileges, our workshop being one of those privileges.

We made ourselves comfortable, and a few minutes later, about 12 inmates walked in. They introduced themselves and, after hellos etc., the inmates got busy getting the room ready as per our request. The inmates are in charge of making sure all the equipment is set up properly and accounted for and put away at the end of each session. A bird one of the inmates knitted and gave me to me. He learned how to knit during a class given at the prison.

The tables were put together in a U shape, and this really being the start of our workshops, I have to admit we were pretty much flying by the seat of our pants. Armed with a few exercises I had picked up from some other songwriting workshops I had attended throughout my studies, we launched into it. Little did we know how much this experience would impact the rest of our lives.

We started out by sharing a little about ourselves, the trials, tribulations and the successes that had shaped our lives. James talked about his addiction to drugs and alcohol, and when he told them that he was celebrating 25 years of sobriety, the room erupted with applause and congratulations from the men. Addiction was something they all could relate to, and for many, it was the reason they had gone off the rails and landed in prison in the first place. After the introductions, I played a few songs for them. Some wrote down lyrics and asked questions based on the things they had heard in the songs. Some of their interpretations were so interesting they revealed new layers to my own lyrics that hadn’t even occurred to me!

After the music, we passed out the worksheets, and everyone rose to the occasion. I mean everyone! Not one person sat defiantly staring us down or acted “too cool for school”. They all put pencils to paper and wrote and shared their writing with the group. We were blown away!

We spent two days there on our first trip and also did two concerts in different parts of the facility and were treated with the utmost respect, care and attention and gratitude. Jim Carlson, director of Arts in Corrections there, was happy with the way things went as well and booked us to come back the following year.

We felt this whole experience had gone pretty well and talked about how we could take it further. We knew we wanted to continue working with incarcerated folks but weren’t sure how to go about it. We decided to work with at-risk youth to help them find a path towards a life without drugs and alcohol and help them find their voice through their writing. We realized that not all participants would be musically inclined so, in order to reach a larger number of people, we decided to develop a creative writing workshop instead of focusing purely on songwriting.

When we returned six months later, we told them of our plan to work with at-risk youth and asked them if they might have any words of wisdom they would like to share with the kids we would be working with. The next day, one of the inmates gave us a two-page letter written straight from the heart describing his upbringing and how he had been sexually assaulted by a family member and a neighbour as an adolescent. His letter was a tremendous gift. We have read his letter at every workshop since and each time you could hear a pin drop.

We have been to New Folsom eight times now, and each time has been like seeing old friends. Seeing how much music and the other art classes offered there have changed people’s lives is something to behold. One of the guys there, Marty, said he never realized there was love in the world because he had never experienced it before he found music. He has since become a fine songwriter.

From Chains by Marty:

I had a sweet companion

She was sweet as summer rain

She’d have lived and died for me

She rocked away my pain

I could have had love

I could have had love

But I chose these chains Playing with a few of the guys in the “in house” blues band at New Folsom. Ken, sitting in front of me, is the fellow who wrote the lyrics for Flowers of Appalachia.

There was one inmate we found it extremely difficult to reach. His name was Spoon. He sat outside the room most of the time and didn’t participate. After about our fourth visit, he finally let his guard down and shared some of his poetry with us and the group. Much to our surprise, he gave us a copy of a book of his poetry published by an organization in Sweden that has been advocating on his behalf. He also gave me his only copy of a book called “Jump Write In” by Writer’s Corp, containing numerous writing exercises collected by teachers who work with at-risk youth. I read through the entire book and chose half a dozen or so that I thought would work well in our workshops. Much to my amazement, they completely transformed the workshop. The writing that has been produced through these exercises has been astounding, and so many of the participants are amazed by what they themselves have written. Spoon and Marty during a Music/Poetry session at New Folsom.

I also ended up co-writing a song with Ken Blackburn, an inmate from that same group. He had written a gorgeous poem, and I asked him if he would mind if I put music to it. It ended up on my most recent CD and is called “Flowers of Appalachia”. You can have a listen here if you like.

We are so very grateful to those first inmates we met during those workshops, many of whom have been transferred to other facilities.

There is much more to come so I’ll end off with this piece of writing from one of our groups.

I want to be remembered not lost or misplaced

I want to be free from drugs

I want to know a better way

I want my freedom back

I want to be all I can be, happy

Happy to be me. City profile: a songwriter’s view of ...