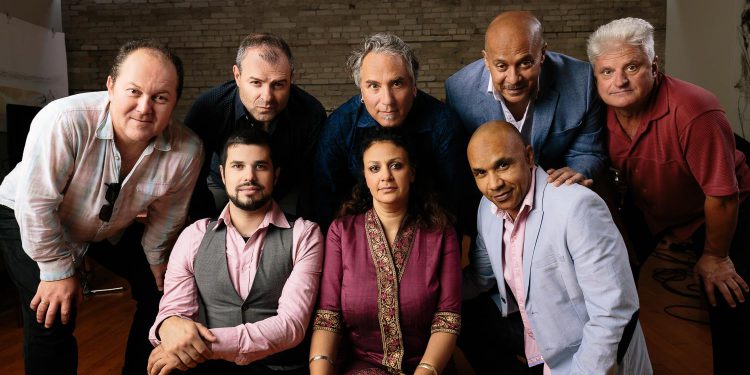 Looking to discover some great new music from around thew world? Roots Music Canada attended several of the Global Toronto world music showcases, which featured Toronto musicians who have arrived here from all over the globe. We have coverage from two writers, Elizabeth Szekeres and Paul Corby, and lots of tracks for you to check out. Here is Part 2.

You’ve probably never heard electronic music like this before.

Imagine the scene: two tables covered in red velvet, bearing two Apple laptops and electronic gear with dozens of knobs and dials. There are two musical instruments on view: an electric violin and a set of tabla – Indian percussion instruments. In this small studio space, we were about to be treated with a unique form of dance music, an exploration in electronica from two master musicians.

Gurpreet Chana plays tabla (electro acoustic) and the very unique and beautiful hang drum from Switzerland. His co-conspirator, Robert Mason, plays electric violin, laptop and synthesizers. The pair borrow from tech house, drum ‘n’ bass and dubstep to create and explore the complex interrelationships they are creating between digital composition and classical instruments. On the screen behind the musicians were lush visual tapestries by VK SEKS.

Gurpreet Chana, born in the Toronto suburbs, is known as The Tabla Guy. He is a classically trained musician, and, since age three, he has played tabla, a paired set of drums, the left one larger and lower in tone. The playing of these drums, with both hands working simultaneously, is a complex working of the fingers and palms of the hands to create a huge diversity of rhythms and sounds. Gurpreet’s hands were a joy to watch as he played ‘tablix,’ his groundbreaking digital fusion technique that uses custom digital software.

Robert Mason has had a violin in his hands also since the age of three. He is a classical composer and violinist who studied at the renowned Eastman School of Music in Rochester. Since then, he has been consumed by the vast scope offered by composing and performance, and by improvisation during performance. He is a guy who is, very simply, musically curious, and his explorations have led him into the myriad possibilities in electronic music and computer aided production. Watching the pair of them playing riffs and then looping, altering, adding to and enhancing the sound landscape was a blast. It was a sonic journey through a new kind of aural landscape, and pretty good to dance to, as well.

Koerner Hall in only a few years, has developed a world-class reputation for its delightful sound and warm, inviting atmosphere. This was the venue for two amazing world music bands that were part of the Global Toronto Conference.

Take twelve of the best musicians in Canada and select them all from different musical and cultural traditions. That’s the basis of Kuné.

“Kuné” is the Esperanto word for “together,” and there are few places in the world other than Canada where you could find such a diverse array of musicians, let alone be able to put them together to cooperate on creating such an amazing concert and album. The nations represented include Cuba, Peru, Mexico, Ukraine, Canada (Métis), Greece, Tibet, Pakistan, Brazil, China, Iran, and Burkina Faso. Ably led by artistic director David Buchbinder, the orchestra has composed and arranged, toured and recorded together. They have formed a sound that is international and global, but also of Toronto. Says Mervon Mehta, executive director of performing arts at the Royal Conservatory, “They illustrate what is possible when we listen to each other and play together.”

It’s a big band sound that this orchestra produces, and yet the music is familiar – it’s folk music with a classical bent, an almost symphonic approach to the presentation of these traditional pieces of music.

Lasso, from Burkina Faso, knocked the audience over with his playing of the wooden flu?te peule while singing at the same time. Aline Morales from Brazil did an astounding job on percussion. Padideh Ahranejad played a gorgeous “moment of silence” on her instrument, the tar from Iran. Allyssa Delbaere-Sawchuk hit her Métis fiddle tunes right out of the park, and Anwar Khurshid, from Pakistan, played gently on his sitar and told us that music is the sound of an angel whispering.

You can watch the entire Kuné concert from Friday night here at https://www.kuneworld.com.

Put trumpeter and composer David Buchbinder in a room with Cuban piano master Hilario Durán and six other virtuoso musicians, and magic is pretty much going to happen. This was a stunning performance of a small Jazz orchestra exploding myths of what jazz should be. The band was tight, and perfectly expressed the genius of the composers who created the music.

This eight-piece band explores David and Hilario’s compositions that explore the connections between Jewish, Cuban and African music. David spoke of being inspired by historical and mythical stories of the complex culture of ancient Andalusia in the south of Spain, and the Spanish Conquistadores who carried African and Jewish music to Cuba by way of trade in goods and slaves. But his inspiration also comes from more common origins, such as the song of a chickadee in spring outside his open window.

In the band, there is piano, voice, bass, drums, percussion, trumpet/flugelhorn, saxophone/clarinet and violin. Every musician nailed their performance, and together, they were unstoppable. Hilario Durán was especially right on the money, his fingers flying over the keys of the lovely Yamaha grand in Koerner Hall.
This is jazz at its best, informed by both tradition and modern sensibilities.

Odessa/Havana won the 2014 Juno Award for Best World Music Recording, and in 2008, they won the Canadian Folk Music Award for World Music Group of the Year.