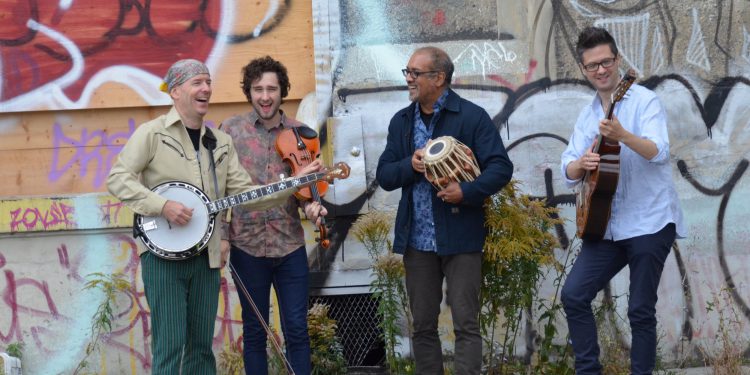 Looking to discover some great new music from around thew world? Roots Music Canada attended several of the Global Toronto world music showcases, which featured Toronto musicians who have arrived here from all over the globe.  We have coverage from two writers, Elizabeth Szekeres and Paul Corby, and lots of tracks for you to check out.  Here is Part 1.

Toronto has grown big time – grown up into a real adult with many talents and diverse musical tastes that have a lot to do with Toronto being a mecca for immigrants from all over the world.

The gorgeous auditorium at the Agha Khan Museum was the venue for two fantastic bands: the Cris Derksen Trio, and Justin Gray and Synthesis.

Cris Derksen is a classically trained cellist and composer who comes from both Cree and Mennonite heritages.  She combines contemporary electronic technology with her carbon fibre cello sounds and has travelled the globe with her band, building captivating bridges between traditional and modern music.  Cris was mentored by Buffy Sainte Marie and has deep connections with many other Indigenous musicians.

Looping and braiding her music, Cris composes tunes that draw on traditional Indigenous rhythms and vocals, contemporary cello styles and electronica.  Essential rhythms in the band are provided by percussionist Jesse Baird, who has worked with some of the best musicians in Canada, Feist being one. And the trio is completed by the acclaimed Anishinaabe hoop dancer Nimkii Osawamick, who leaves your jaw on the floor when, one after another, as many as a dozen hoops loop around his limbs and his body, transforming him into a being seemingly capable of flight. His feet seldom rest for long on the floor.

As sound braids its way around the auditorium, you feel encompassed by it, surrounded by swooping coils that encircle you. And, the performance is just as visually spectacular; the hoop dancing captures you with its curving arcs, hoops twisting into the atmosphere, capturing the essence of flight, tying together the music with the tradition.

Cris’ composition comments on the effects of colonization on Indigenous peoples – the reasons we need to fix our 500-year-old, largely broken relationship. Defying compartmentalization, Cris builds bridges to bring musical traditions, and cultures, together.

“What is THAT?” you heard people murmur, as Justin Gray took to the stage with his band. “THAT” is the bass veena, a unique instrument that Justin co-created with Toronto luthier Les Godfrey. It kind of looks like a guitar, but not. It’s a beautifully carved, wooden fretless bass, which incorporates a myriad of harp strings along the top side of the large bowl-shaped body.  Those harp strings may be strummed directly, or may resonate sympathetically, making drone sounds like those you hear on the sarod or the sitar. The instrument allows Justin to combine his love of Indian classical music (think ragas) with modern western music… and the result is Synthesis.

In Synthesis, Justin has surrounded himself with some of the best musicians in the business: renowned jazz violinist Drew Jurecka, tabla player Ed Hanley (Autorickshaw), and drummer/percussionist Derek Gray. On the latest CD, New Horizons, there are a total of nineteen virtuoso musicians from the worlds of Jazz and Indian music, who collaborate to create an absolutely gorgeous soundscape. What we heard at the Agha Khan Museum was merely a taste of the tapestries that are woven on that album.

During their showcase for Global Toronto, the band played original compositions by Justin. He called their work ‘collaborative improvisation.’  You clearly hear the jazz influences, but also western contemporary music, as well as huge Indian influences, with the tabla; the sarod and sitar sounds that emerge from Justin’s unique bass veena; and brass Tibetan singing bowls from the percussion department. This is music that transports you somewhere else entirely.

Bassists are usually side-men in other people’s bands. With this project, Justin Gray has truly emerged from the shadows as an original artist in his own right.

The Mongolian Yurt in the outdoor atrium of the Agha Khan Museum was the venue for three other intimate showcases: Sina Bathaie, So Long Seven, and Blisk.

Sina Bathaie freely admits he had no choice but to become a santur player. He was born in Iran, the son of santur master Javad Bathaie and started playing the instrument himself at age seven. Schooled in classical Persian music and also educated on oud and tonbak (percussion), he performs concerts that absolutely hypnotize audiences around the world with his original compositions and unique approach to Persian music.  The intimate setting of the yurt, with its hand-painted motifs on the supporting beams, was a lovely place to hear this gorgeous music.

The santur is a stringed instrument that is an ancestor of the piano and closely related to the hammered dulcimer known in western traditional music. There are 100 strings stretched over a hollow trapezoid-shaped box with eighteen bridges in two rows, producing three octaves. It is played with soft-tipped, feather-weight mallets that sit comfortably between fingers and thumb for maximum control. When Sina plays, the mallets fly from string to string so fast you cannot tell whether there are two or four of them in his fingers.

Collaboration with other wonderful musicians has served Sina very well. In his band, his playing is enhanced with arrangements of cello, electric bass and guitar, as well as flawless rhythmic percussion from the cajón (box drum). Sina plays with outstanding mastery of his instrument and obviously has a great symbiosis with his percussionist, Siavash Sadr Madhavi. The sound they create together is simultaneously delicate and strong. Pretty mesmerizing.

The western ear is sometimes confused by music that doesn’t follow the usual 4/4 or 2/4 time signatures. When confronted by music composed in seven or five or nine, we don’t intuitively know how to understand it. This band, So Long Seven, makes it accessible.

There are lyrical tunes, interesting rhythm patterns and eastern themes that join with jazz, Arabic and Indian musical ideas. Who would have expected a banjo in a world music fusion band? But here it is, and it sounds like it was always supposed to be there.

So Long Seven was founded by Québec violinist William Lamoureux, who has strong ties to Toronto dating back to his days in the Humber College’s Bachelor of Music program. Guitarist Neil Hendry studied music at Berklee College in Boston, and has since followed many musical muses, from country to jazz, to Celtic guitar.  Banjoist Tim Posgate is a multi-instrumentalist who has travelled the world with his own music and played in multiple jazz bands. Ravi Naimpally, born in India and raised in Thunder Bay, is a master of the tabla. He has been a huge contributor to the world music community here for the past twenty years.

Kala Kalo is the second album for this group. The words translate to “black” in both Hindustani and Romani – implying the ‘black sheep’ of the family. The album is therefore a poem to the dispossessed, the ostracized, the outcast, in whatever community or setting you can imagine.  The band members’ ages span four decades, but all compose and play with and for each other with great respect while sharing laughter and goading each other into performing at a very high level for their rapt audiences.

Formerly performing as part of the Balkan Electro Experiment, here are five lovely women who sing, dance and play the songs of Eastern Europe. This is a musical and cultural voyage through Macedonia, Serbia, Bosnia, Ukraine, Poland and Russia, among other places in that region.

Ewelina is from Poland, Stacey, Stephania and Kassandra from Ukraine, and Ekaterina from Kazakhstan. All now make their homes in Toronto.

“Blisk is a synthesis of polyphonic Balkan and Slavic song, dance and movement, backed by hypnotic percussion,” according to their website. The ladies have only been together since 2017 but already sound like they have been completing each other’s song lines for years.

Visually, the group is lovely – each woman wears clothing evocative of the traditional garments from the regions where their songs are collected. Colourful embroidery, hand-woven scarves, and floral skirts are embellished with funky traditional jewellery. Even the shoes bear the style of the cultures the ladies are representing – red or black leather shoes and boots. The look completes the package that evokes the eastern European cultures from which the music stems.

The instruments are fascinating too. The band members accompany themselves with accordion, bells, horn flute, dumbek, a large standing drum, beribboned tambourines, finger cymbals, shruti box and a large hand drum with jingles inside played with the fingertips. The total impression is one of beauty – in the voices, the look, and the sounds. Unless you speak one of the eastern European tongues you might not understand the words, but thank goodness music is a universal language.