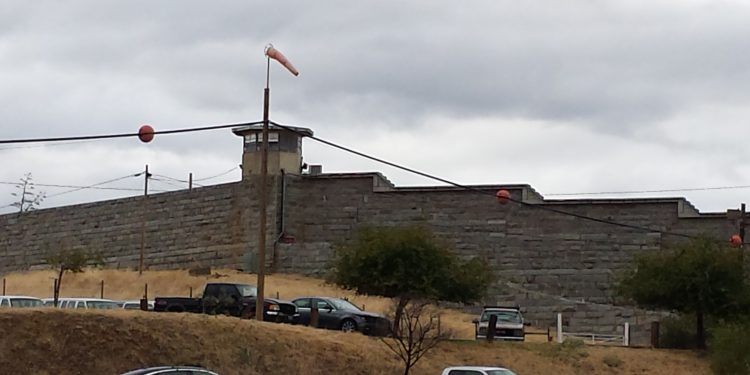 The walls of Old Folsom Prison and the one of the many gun towers. (L. McRae)

I am thrilled to be writing this piece for the re-launch of Roots Music Canada. Roots musicians like myself need the support of organizations like this to help spread the world about our music, while supporting each other at the same time. I’ve been asked to talk about the workshops I do with inmates and at-risk youth, so here goes.

Life surely is a series of twists and turns, deciding which roads to take and which ones to avoid. Back in October of 2010 my husband, James, and I met a fellow singer-songwriter from Alaska named Buddy Tabor. Buddy was as irreverent, intelligent and topical as his music. Sadly we lost him in 2012.

This video for Buddy’s song “Black Crow Night” shows some of that irreverence and power and his wicked sense of humour. I love this song so much – the feel, everything about it. The ending of this video is pretty damn ironic.

Buddy happened to be doing a house concert at the home of our friends, Rick and Denise Williams of Hillbilly Haiku House Concerts here in Nashville, where James and I have lived since 2007.

I got talking with Buddy before his show, and half an hour into our conversation he asked, “have you ever thought of working in prisons?” I admitted that working with inmates had never occurred to me, but when he mentioned Folsom Prison, California’s infamous maximum-security prison, perhaps more famously known as the host of Johnny Cash’s touring road show back in the day, my husband James (who also happens to be my manager) immediately thought, “good career move”. I have to admit that, without James’ support, I’m not sure I would have gone down that road. Not only would it turn out to be one of the most humbling and exhilarating experiences of my life, it also sparked an entirely new aspect of my career – teaching!

Johnny Cash at Old Folsom Prison, which, now minimum security houses Level 1 inmates.  (A photo of a photo in the Folsom Museum/L. McRae)

A year later, in October 2011, after all the clearances went through and our schedules lined up, we found ourselves at New Folsom Prison for the first time. Jim Carlson, who leads the Arts in Corrections Program there, and his lovely family were our hosts for the next four days. Jim and his wife also hosted a house concert for us to help pay our travel and expenses while in California, as the program had been defunded a few years before.

We landed in Sacramento, picked up our rental car, and headed to the Carlson’s with some trepidation. After all, this was a men’s Level 4, maximum security prison filled with hardened criminals. Jim filled us in on what to expect the next day, and, after a somewhat sleepless night, we headed out at 8:00 a.m. the next morning for New Folsom (California State Prison, Sacremento).

We were told we could not have any cell phones (they go for thousands of dollars behind bars), computers, etc., but we were able to bring in my instruments, of course. We were greeted by a friendly guard at the first check-point, and, after he checked our credentials and the equipment we had in the car, we moved on to the next check-point. This one was a little different. We had to go through a locked gate and up to another check-point, and the guards checked under the car this time from a hole in the ground that kind of reminded me of the bays where you get the oil changed in your car. Once we were cleared and had waited for the guards to unlock the gate, we got in the car and went off to the next check-point. Now we were inside the prison gates.

Everything about this place is meant to intimidate: the colour or lack thereof, the cold flat surfaces, the razor wire and the gun towers that are meant to be seen from inside as well as out. The buildings appeared to have no windows except for the little slits where the inmates live. I should mention as well that all the American prisons we have visited are on acreage so large they can’t be seen from the highway. Out of site, out of mind.

As my only real impressions of prison had been from films, and while many are pretty fair representations, James and I were pleasantly surprised by the reception we received at New Folsom.

The walls of Old Folsom Prison and the one of the many gun towers. (L. McRae)

There may be razor wire atop the gun turrets and concrete walls that keep people locked in, but it’s the introduction of art into these people’s lives that can bring about profound change – by helping them realize that life does have value and that love really can change people from the inside out. We have seen it happen. More about that in the next installment.