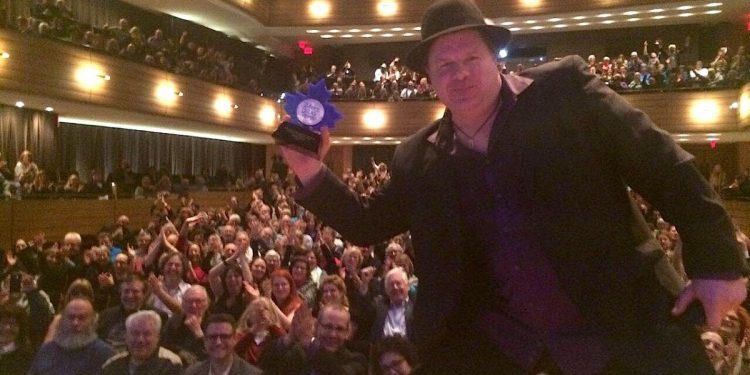 Jason Buie's epic selfie on stage collecting his Maple Blues Award in January was a highlight of the evening, organizers said.

You know you’ve made an impression on the world when your untimely death prompts people across the country to hold benefit concerts for your family.

Victoria bluesman Jason Buie was that kind of guy.

Buie died suddenly Mar. 22 at the age of 47, less than three months after scoring the biggest breakthrough of his career:  winning the Maple Blues Award for Best New Artist.

No cause of death was released.

Buie was a guitar-driven electric blues-rocker in the style of Stevie Ray Vaughan, who’d been plying his trade in the blues music trenches for more than 30 years.

But back in his home town, which he’d returned to in 2011, one could argue that Buie is remembered as much for his extraordinary generosity as he is for his music.

“Jason was the type of community guy communities can scarcely afford to lose,” said Victoria Times Colonist music writer Mike Devlin. “He worked hard at his own career, but worked just as hard at furthering the careers of others. … He loved bringing new acts along for the ride, and giving them a chance to play in front of big audiences.”

Buie was the artistic director of the Esquimalt Rib Fest, where he frequently booked local talent alongside big, out-of-town names.

He held annual Yuletide blues shows to raise money and food for a local food bank, and he held annual holiday toy drive concerts to bring in gifts for children living in poverty.

In 2007, while living in suburban Vancouver, Buie founded the White Rock Blues Society, and he continued to return to the mainland to perform holiday benefits there too.

“He was a lovable guy with a great spirit,” Devlin recalled.

The Toronto Blues Society kicks off the Buie benefits tomorrow night at Hugh’s Room Live with a line-up of performers that includes Suzie Vinnick, Brian Blain, and Ken Whiteley.

Buie’s bandmates from the group TNT will hold a benefit Apr. 13 at the V-Lounge in Victoria.

The following Friday, Apr. 20, Devlin plans to hold a benefit for Buie’s family at Victoria’s Rubber Boot Club, featuring David Gogo and others.  Details, when confirmed, will be posted on the Rubber Boot Club Facebook page.

The White Rock Blues Society also has a benefit in the works.  Details will be posted on its Facebook page when confirmed.