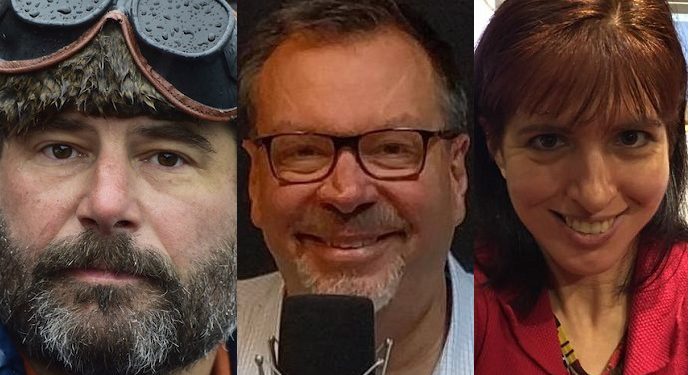 It all began with a guy named Bob MacKenzie.

No relation to the singer of “Take off to the Great White North,” mind you, but ya’ gotta admit, it adds a little something to the origin story.

Bob is a poet and author who once led a Kingston-based band called Poem de Terre.

But it’s possible that his biggest contribution to Canadian folk music was buying RootsMusic.ca, the domain your browser is currently pointing to.

Were it not for Bob, the site you hold in your hand right now might be filled with corporate claptrap, or worse, up for sale at a price none of us can afford.

Instead, it stayed out of nefarious hands long enough to be bought by one David Newland in 2009 – Bob having, in his own words, not used the site “effectively or to good advantage.”

David had been an editor in chief at Canoe.ca, so he knew a little something about running a web site.  He’d also produced online content for the CBC and the Discovery Channel.

“I just knew it wanted to be something,” he said of the domain.

David called his soon-to-be partner in crime, Andy Frank, to tell him the news.

“He announced that he had just spent a good deal of money procuring a domain name, RootsMusic.ca,” recalled Andy, who had recently launched a video production company called Frankcasting New Media.

“He confessed that he had no idea what to do with it at the time but that the name was too good to pass up.”

David Newland and Andy Frank stand in the Woodshed set in the Roots Music Canada offices.

Shortly thereafter, David pulled together a circle of friends to conceptualize the site, and Roots Music Canada was born on Nov. 17, 2009, Gordon Lightfoot’s 71st birthday – an auspicious start for a fledgling online folk publication.

Its mascot and illusory editor was a lovable moose named Gordy.

That would be me.

“I named it Gordy because of Lightfoot, but also because of all the Gords … Lightfoot, Hull, Downey, Pinsent, etc.,” David explained.  “There was a Letterman Top Ten List once that listed ‘Not enough guys named Gord’ as a thing Canadians didn’t like about the U.S.”

The site published album and concert reviews, “think pieces” about topics such as how musicians learn folk music, coverage of events such as the Canadian Folk Music Awards and the Canadian Aboriginal Music Awards, and advice for artists working in the roots music trenches.

It also produced 45 editions of the Woodshed Sessions, video interview and performance segments with Canadian roots artists.  They were shot on a set built with scrap lumber from a junk yard on Cherry Street, said Andy, and “sprinkled with Canadiana artifacts David picked up on roadsides over the years.”

“Some of the videos were top notch,” David recalled.  “The sound was excellent, and they looked damn cool, shot around a single mic but with three cameras. … Ron Hynes – that one’s still online. He was amazingly open and present.  But so many others. We interviewed Carolina Chocolate Drops before they got the Grammy.” On top of all of this, RMC pioneered the streaming of the Canadian Folk Music Awards, and, for a time, it was home to a streaming radio station that featured a who’s who of Canadian roots personalities, including Mike Regenstreif, Bill Garrett and Michael Wrycraft.

At its peak, well over 50 people were writing for the site, and Andy and David were each putting in around 20 hours a week, Andy estimated.

However, nobody was getting paid.

“Like many idealistic artists, we didn’t put money first,” Andy said. “We just bolted out of the gate like a couple of raging bulls and figured we’d find a way to pay ourselves later.”

“It was kind of a dumb thing to do,” David acknowledged, but he agreed it was also part of the zeitgeist.  Few media outlets a decade ago went online with workable business models, a fact that has since led to many a tragic demise.

“We were figuring it out. We were ahead of the game in terms of both social and crowdfunding,” he said.

Then, in January of 2012, Andy was diagnosed with colorectal cancer; he spent several months undergoing chemotherapy and radiation.  When he recovered, his first priority was rebuilding his production company.

David, meanwhile, had lost his job, moved out of Toronto, and become a dad again.

“It was a tough time,” Andy recalled. “Bill Garrett and a few others joined me in streaming Roots Music Radio on the site, but with a lack of funding, that dried up fairly quickly.”

Jaron Freeman-Fox performs in the Woodshed.

And there it stayed, confined to the corner of a server some place, unviewable to the public, for more than two years.

That’s when Heather Kitching came into the picture.

Heather was a long-time publicist for award-winning artists like David Francey, Alex Cuba, and Steve Dawson.

She talked to music writers every day, so she knew that newspapers were shrinking and dying as readers and advertisers migrated online.  She also knew that they weren’t covering roots music much any more.

By the end of 2015, she realized it wouldn’t be long before coverage of Canadian roots artists disappeared all together unless somebody did something.

And hey, maybe that somebody should be her!

She was, after all, just three credits short of a journalism degree from Carleton University, and she’d done tons of work for the CBC and SiriusXM.  Also, she knew how to run a business because, well, she already was.

She figured she could fumble through as the manager of an online magazine.

So Heather emailed her old colleague Andy Frank to see about buying his old site. Instantly, they agreed on what it was worth.

Heather emailed a batch of cash to Andy and David, the only payment either man has likely ever received for his thousands of hours of work. Then she started emailing everyone she knew – record labels, publicists, folk club artistic directors, you name it – asking them for money to help the site survive.

She launched a Patreon campaign to collect the donations, and the support right out of the gate was encouraging.

In no time, she felt confident enough in the viability of the project to step up her spending and get ready to launch.

And that brings us to the page you’re looking at right now: a brand new web site, yes, but one that builds on the proud community space first envisioned by Andy and David.

“We were not exactly Lennon-McCartney, but we made a good team,” said David, now an ambassador for Adventure Canada.

“I’m glad we did what we did,” said Andy, now the manager of AMI Audio at Accessible Media Inc.  “We proved to some extent that it could work. We created some meaningful content and had a lot of fun along the way.”

“The need we were trying to address still exists: a one-stop shop for all you need to know about the roots music scene in Canada,” he added. “It’s a huge job and challenge, but one that I still believe can be rewarding for all.”

Welcome to the next phase of that challenge.

A Message From Gordy